Our staff is made up of passionate professionals who all have one goal in mind - to loosen the yoke of extreme poverty in Korah. 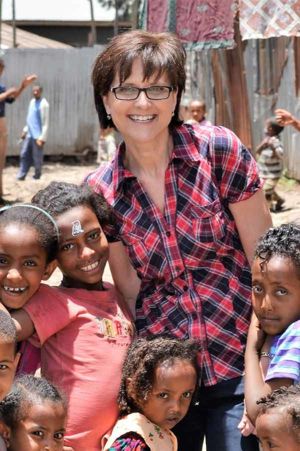 As Executive Director, Eve acts under the HFK Board of Directors to oversee all HFK’s programs and operations. Eve is in ongoing, continuous communication with HFK Ethiopia's Country director and staff, directing all spending, leading, and supervising the management and development of our charitable activities. Eve is regularly on the ground in Korah, often bringing short-term team members from the U.S. and Canada with her.

Eve was born in Germany and spent her early years living in Europe including 2 years in Sardinia, Italy, where she was exposed for the first time to people existing in very poor circumstances and children living in orphanages. These childhood experiences influenced her and after attending Aldersgate Bible College in Moose Jaw, Saskatchewan, she obtained a social work degree from the University of North Dakota. Here she met her husband Dave and they subsequently settled in Orlando, Florida, where they adopted their three sons. In Florida Eve worked as a facilitator for the U.S. Navy’s Alcohol & Drug Addictions Prevention Program, and in juvenile corrections.

In 1995 Eve and family resettled in Canada. Shortly thereafter she and her husband travelled to China to adopt their daughter. Eve homeschooled her children for 14 years and provided private tutoring as a certified Multi-Sensory Language Therapist for children with learning disabilities. She later became a Registered Social Worker (RSW), working over six years in domestic and international adoption. During this time, while facilitating Ethiopian adoptions to Canadian families, she first became aware of the desperate levels of poverty in parts of Ethiopia.

In 2010 the seeds for HFK were planted when Eve went on a 2-week medical mission trip to Ethiopia and unexpectedly ended up in Korah. Observing a level of poverty that is difficult to imagine, Eve’s heart was deeply touched and hurting for the people of this community. After returning to Canada, Korah never left her mind - how could she help and encourage these people? God led her on a journey of prayer for many months. In July 2011, with the encouragement of family and friends HFK was founded. Read the full HFK story.

Eve’s vision is to come alongside community leaders for the development of long-term sustainable change. Her hope continues to be to see families break out of poverty and find hope for today and tomorrow – trusting God with all her heart. 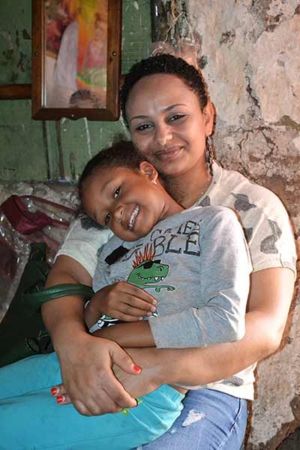 Originally from Eritrea, a country in East Africa, just north of Ethiopia - Hosanna has been in Canada for 2.5 years. She joined Hope for Korah at beginning of 2017 as the HFK Project Finance Manager and right from the start, she has been an amazing asset to the team. Hosanna’s accounting skills, detail-oriented nature, excellent English, warm personality & contagious laughter are a joy to have in the HFK office! With a background in accounting, most of her previous experiences are related to humanitarian & development projects, working for the European Union and specialising in Project Accounting. Hosanna reflects: “It’s been a journey filled with constant blessings and miracles since my arrival in Canada. One of them is having this amazing opportunity to be able to work in the field I love and yet connect to my home country and people of my own origin, and be able to serve God and the people Korah, all at the same time.”

Growing up in an impoverished country, devastated by war and religious persecution, Hosanna has watched her own parents and other families struggle to provide for their children, sacrificing everything to give them the best life they could. This has developed her compassion for the families of Korah and she can empathize in their struggle to build a bonded & God-fearing family.

During Hosanna’s last two trips to Korah, she was able to develop relationships with our Ethiopian staff and numbers of HFK families. She also had the chance to practice her Amharic for the first time, as this was the official language when she was a child. At that time, Eritrea & Ethiopia were one country. Hosanna’s last visit was rather exciting as she had the chance to reunite with her family for the first time after 2.5 years of separation!  Hosanna and her husband Temesghen have 3 beautiful children ages 5 – 11 and in 2016, due to extenuating, life-threatening circumstances, they had to make the most difficult and heart-breaking decision for Hosanna to flee Eritea alone. Read more about Hosanna’s personal journey of courage and God’s faithfulness in reuniting their family in Hope For Korah's Spring Newsletter (PDF).

As Hosanna considers her future with HFK, she says with anticipation: “I am eager to see God’s plans in transforming the lives of people of Korah over the coming few years. God willing, I see myself working for Hope for Korah for years to come while adjusting to my new home here in Canada.” 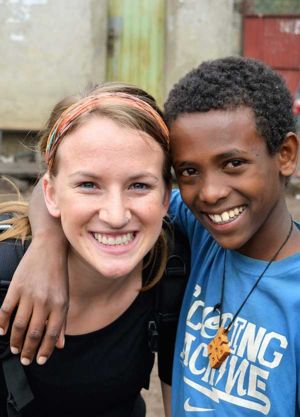 Jacqueline’s first trip to Korah, Ethiopia was in April 2013. The people quickly captured her heart, which led Jacqueline and her husband Jesse to begin sponsoring a family through Hope for Korah. Since that time, Jacqueline has moved into the position of HFK Sponsorship and Programs Manager. She regularly communicates with HFK’s Ethiopian social workers, and provides sponsors with personal updates on the health and progress of the individuals and families they support. Jacqueline is also involved in program and staff development, using her knowledge to help ensure that each step taken by HFK is one that upholds the dignity of individuals in the program, and helps to equip them for a future of empowerment and sustainable growth.

Jacqueline is a Registered Social Worker (RSW) with the BC College of Social Workers and holds a Bachelor of Social Work (BSW) degree with Honours from the University of the Fraser Valley. She is currently working on completing her Masters in Social Work with her thesis and research focusing on ‘culturally appropriate approaches to holistically addressing women’s mental health in Korah’. With a passion and interest in international development and mental health, Jacqueline has travelled and volunteered in South East Asia, and served with HFK on numbers of trips to Ethiopia. She has recently worked for several years as a Youth and Family Drug and Alcohol Counsellor, offering ongoing professional support to those facing challenges with substance use, trauma & mental health. 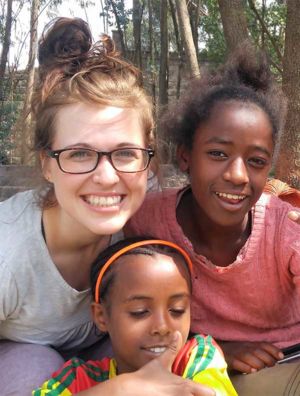 With a heart for the nations and a passion for sustainable development, Karissa joined Hope for Korah in January 2016 as HFK’s Administrative Assistant and Teams’ Coordinator. Karissa is a great asset to our team as she utilizes her gifts of public speaking, communication, organization, teaching and her deep love for people within Hope for Korah. Her experience lies in the social work arena, both ministering to women struggling with eating disorders & mental health, and working in soup kitchens in India.

After living in India for a few months with an Indian family, Karissa changed from a degree in teaching to courses focused on development and cultural issues. With a degree in Sociology & Political Science and a focus in Global Development Studies, Karissa co-founded the “Student Association for International Development” at the University of the Fraser Valley to bring awareness to her fellow students of issues both locally & internationally.

During her first trip to Korah, Karissa was greatly impacted by what HFK is doing on the ground, and enjoyed connecting with her sponsored family. While in Ethiopia, Karissa was grateful for the chance to meet the HFK staff, families, and Elders. She hopes to continue fostering these relationships she has made for years to come. 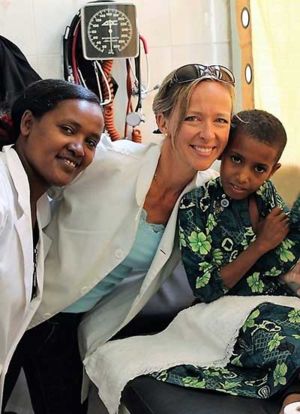 Tammy brings 20 years of nursing practice to her voluntary role as Medical Coordinator for Hope for Korah. She began her nursing practice as a bedside nurse in Chilliwack General Hospital before moving to Vancouver in 1995 to complete her degree. Upon completion of her Bachelor in Nursing (BSN) with Honours, she began a 6-year role working in Home Care, bringing a much broader perspective and skill set to her earlier acute care perspective.

In 2001, she married Mark and moved out to the Fraser Valley where she began her Masters of Science in Nursing (MSN) at the University of British Columbia, while also returning to acute care and re-training in Critical Care. For the past 12 years, Tammy has worked in various roles in Emergency medicine, while trialing a teaching stint for the University of the Fraser Valley, working as a Project Coordinator in the Emergency Department, as well as, travelling and working in Ethiopia. In 2014 - 2015, Tammy’s nine-month period in Korah allowed her to re-model a former free-standing medical clinic into a primary health centre serving HFK beneficiaries and staff. This opportunity has brought together Tammy’s love of travel, third world service, and nursing. Every year Tammy leads a medical to Ethiopia, to serve in the HFK Medical Clinic.

In the future, she looks forward to establishing an Advisory Council for the clinic and seeing how God will lead HFK to expand the current services, to collaborate, support and partner with other local institutions in Addis Ababa, and equip Ethiopian medical personnel to serve their own people. 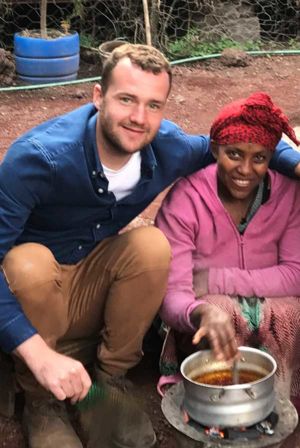 Jake was born and raised in a small farming community in rural northeastern Pennsylvania. It was here that he learned the fulfillment that comes from offering a helping hand and the importance of hard work. Jake’s first missions trip to Korah took place in early 2011, and since that time he has embarked on over 22 trips exclusively to Korah in various volunteer roles and for different lengths of time. Through his 6 years of experience in Ethiopia, Jake has grown in his understanding of the culture, and language as well as learning how to holistically serve those living in extreme poverty. Early on, Jake met Dave and Eve Pohl who established Hope for Korah. He describes that God truly used their passion and influence to teach him how to effectively and humbly come alongside the poor. 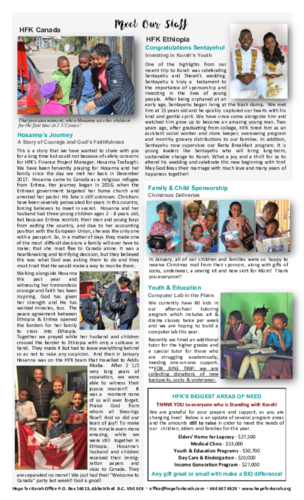